Now that September has started the tv show season starts back up again. I suppose this is mostly true for America and all. I don’t really feel like this is a big thing here in the Netherlands. Or maybe I’m just not interested in what they show here. Safe to say is that the Netherlands certainly doesn’t have the huge show openings as America does. But I think that’s the same for most countries to be honest.

The Broke and the Bookish wanted to sound in the tv show season with a tv themed prompt. I do watch tv shows but I don’t tend to be up to date with anything being released in America so I can’t show you what I’m excited about coming back to the screen.  However I thought I’d share with you some sci-fi shows I have enjoyed over the years that are finished/cancelled and you can binge inbetween waiting the new episodes of your favorite shows. This turned out rather long though. Oops.

Originally inspired by the original Stargate movie (though certainly no requirement to watch this tv show). Set a year after this movie, the Stargate (an ancient device that uses a wormhole to travel to other planets) is activated again. The military forms a special program with special operation teams that explore our galaxy and defend our planet against alien threat with SG-1 being the front line team.

The show has great characters like colonel Jack O’Neill who, if you didn’t know yet, my favorite character of ever. The team bonds over the seasons. There is use of Egyptain and Norse mythology.

Another favorite character of mine is in this show and is Dr. McKay, a character SG-1 fans might remember from appearing twice in SG-1. He gets a lot more deepening in this show and together with Shephard brings a lot of humor and heart to the story.

Fringe starts when Olivia Dunham wants to rescue her partner from a weird patogent affecting his body. Her quest brings her to Dr. Walter Bishop, a scientist locked up in a ward after a lab assistant died in his lab, and his estranged son Peter Bishop. It also uncovers a larger plot that is going on around involving fringe science. Fringe science is science that departs from the mainstream theories and is considered to be questionable like people being able to move objects with their mind. Ultimately this leads to them joining the Fringe division that researches fringe science occurances.

Fringe is a show that both my husband and I loved. I think the idea of fringe science is something we all have thought about in some way or form and that is what appeals to me the most in this show. The characters grown on you a lot, especially Walter.

Battlestar Galactiva is the reimagined version of the 1978 show. The Twelve Colonies have a tentative peace with the Cylons, a cybernetic race. But when the Cylons attack again with the aid of a human, they are forced to withdraw onto space ships. With the colonies destroyed, the space ships are their only home. They decide to go out in search of the fabled thirteenth colony, Earth. However the Cylons aren’t willing to let them get away that easily…

I enjoyed this show for the idea of the cylons and how they evolved themselves. The show itself is gritty and character driven. However I did not like the characters that much so I had a harder time getting through this show. It was mainly the plot that kept me watching.

Terra Nova
How much to watch: 1 season
Sci-Fi Element: Time travel to the past, dystopia

Overpopulation and a decline in air quality threaten the Earth in 2149. Through a temporal rift Earth has been organizing pilgrimages that lead them 85 millions years in Earth’s past where they hope to establish themselves a future amongst the dinosaurs.

This is a show that mostly captured my husbands attention, but I have to say that the idea is interesting. Overpopulation is a clear possibility for us in the future, lets be honest. So it really is an interesting watch.

In 2077 they have to deal with a lot of terrorists attacks who don’t agree with the corporation soceity. When the terrorists find a way to travel back in time to 2012, a police officer unwillingly is pulled along. Now she has to stop them from changing the future.

I find this series mostly interesting because of the element of changing the future and what is right and wrong in this. The characters started to grow on me throughout the seasons. I did think the last season wrapped up a bit too quickly. 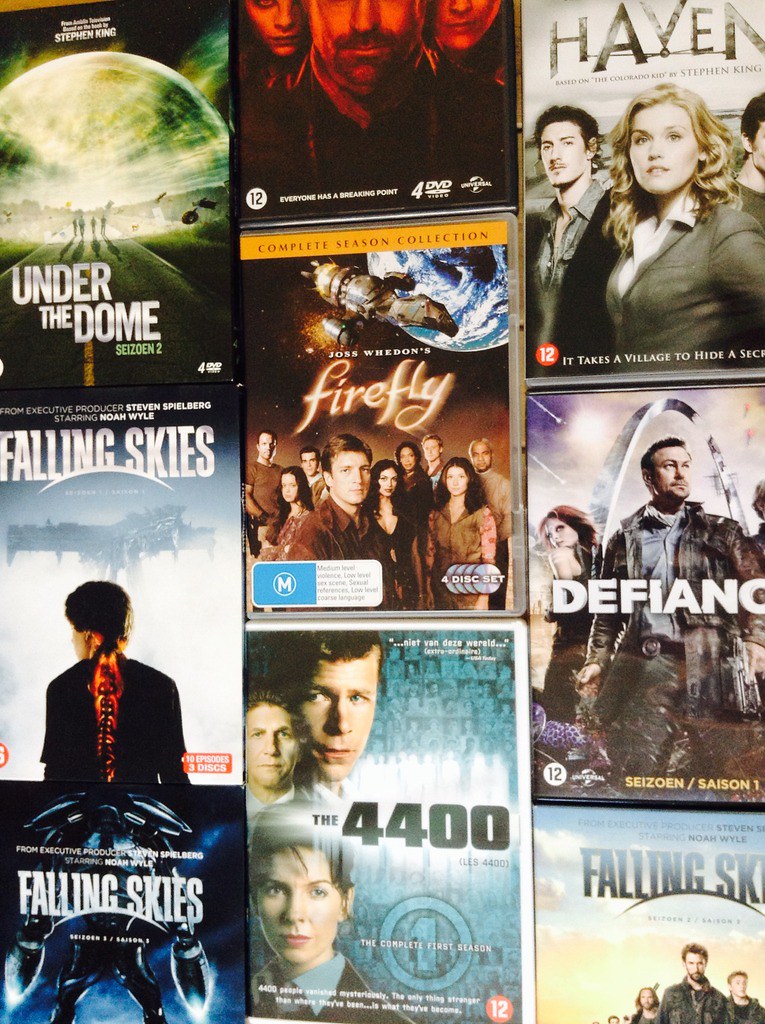 Set in 2517, Firefly follows a renegade space crew aboard a Firefly class space ship called Serenity. When they pick up Simon and his sister, the captain didn’t expect to get to hassle of the Alliance (a fuse of America and China that is the central goverment) onto them.

What makes this show for me are the characters and their bonds over the course of the show. The incorperation of Asian influences and the feel of a space western are also pretty great. This is a must watch!

When a ball of light drops a group of 4400 dissapeared people, all taken from various times between 1946 and then and none that have aged, there is a wonderment about what had happened. Where they abducted by aliens? And why? When the returnees (as they are called) start to display abillities like telekinesis, the questions start to be replaced by fear. NTAC is set up to deal with the returnees as slowly a ripple effect becomes clear through time.

The idea of this show is what caught my interest when it was first aired here. They never finished showing it, but I had to know what happened. There are so many questions throughout the show about what is really right and wrong.

V is a remake of the 1983 mini series. Giant space ships start to appear over 29 cities across the world. Anna, the leader of the aliens known as visitors or V, claims to come in peace. They want to exchange resources for technological advancement. A small group of people start to distrust the visitors intentions though and start a resistance group. What is Anna really after?

Aaah, I loved this so much and I hate that it got cancelled after two seasons. I think this is another plot we all have thought about. What if there are really aliens out there and they come here with their space ships?

Tv Shows I Have Yet to Finish

Set in 2370, the star ship Voyager goes into the badlands in search of a missing rebel ship. When they are chased down and hit by an energy wave they are relocated to the Delta Quadrant, a distant part of the galaxy. After finding the missing ship and incorperating the rebels into her crew, the captain must find a way back to Earth.

I think this is the Star Trek show I remember best even though I never got around to finishing it when it was airing. I think I liked it best because of the female captain who I really liked as a character. While the first few seasons are okayish, I remember it especially becoming interesting when the borg are entered and we get Seven as a character. Of course there is the Doctor (played by Robert Picardo who I love as an actor) who adds something extra to the cast of characters.

Haven
How much to watch: 5 seasons
Sci-Fi Element: supernatural abillites

Haven is inspired by The Colorado Kid book by Stephen King, though it differentiates away from that hugely I have heard. FBI agent Audrey is sent to Haven on a case where she soon finds herself a part of a larger plot dealing with peole that are afflicted by an ability called Troubles. When she finds a personal link to herself, possibly her mother, she decides to stay in Haven to uncover the town’s mysteries.

I love shows that deal with these kind of mysteries with abillities. I have only watched the first three seasons though so no spoilers, lovelies.

Earth has been invaded by aliens. Within six months 90% of the world’s population has been killed, the world’s militaries have been defeated and they neutralized our technology. The story follows the second Massachusetts, a group of survivors that is assisted by a portion of the military left. In particular it follows Tom Mason and his sons as they fight to regain control over their own planet.

When I saw this had Noah Wyle in it I had to watch it. I used to have a crush on him when I was younger, haha. But also the plot interested in me. I love seeing how a similar idea can be approached in so many different ways. I love the characters in this. I think it is a shame some of this is filmed so incredibly dark though. It’s hard to see sometimes what is going on. I still have to get to the fifth season.

Defiance
How much to watch: 3 seasons
Sci-Fi Element: aliens, dystopia

In Defiance Earth has radically changed due to terra forming. Next to humans Earth is now also inhabited by many other species. The show follows Nolan and his daugther as they arrive in the town called Defiance. They work hard to keep the town and its citizens safe while also making sure that the bonds amongst the different species remain good.

I like the setting of this. It’s dark. And I like how there is a constant shifting between the politics and the different species. Not much unlike how things are going on in real life at the moment. I was a bit dissapointed by the second season though. I hope the third one will make up for it.

Under the Dome
How much to watch: 3 seasons
Sci-Fi Element: technology, abillities

Under the Dome is again inspired by a Stephen King book. Chester’s Mills gets cuf off from the rest of the world by a massive, indestructable dome envelops them. The show follows the characters as they try to figure out what is going on, but also as they struggle to regain order and power amongst them.

This is another serie that really captured my husband though we have yet to watch the last season.