Book boxes is a hype that you can’t have missed. Especially on instagram there are various type of book boxes that get unboxed monthly. From Owlcrate to Uppercrate Young Adult box. Book boxes are (often) a subscription to a box filled with (often) one new released book (which is a surprise) and 2-5 bookish goodies that comes once a month. In some cases two-monthly or quaterly.

For us Dutch people these boxes look great, but as they are all often based in countries like America, Canada, UK or Austrialia, the shipping can be a steep price to pay. Next to that, the shipping times takes quite a while, and there is always the possibility that it won’t arrive. I’ve had things not delivered to me from Canada before. Actually, quite often. 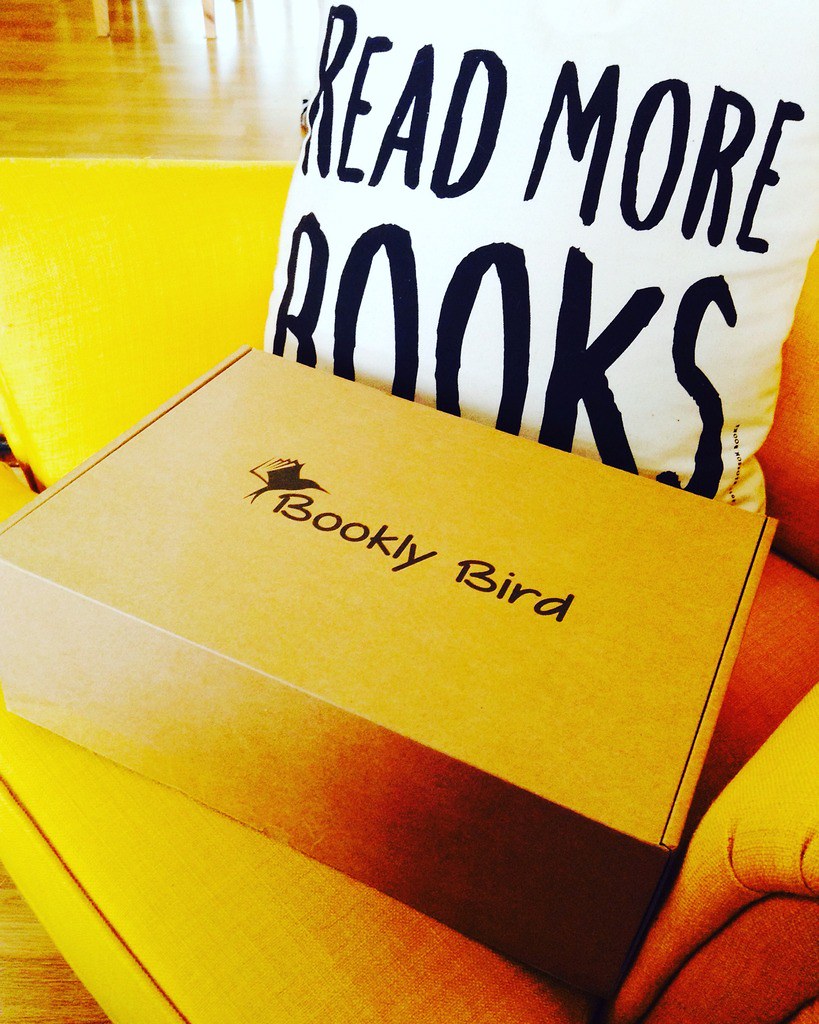 It stops a lot of Dutch (and European) people from ordering one of these boxes. So after the arrival of a Dutch book box that has Dutch book releases earlier this year, Marieke and Anja decided to set up a book box with an English book for those Dutchies that like to read English, called Bookly Bird. I think it is a great initiative. This August is the first time the box is being shipped out. For August the box was only available in the Netherlands.

Starting in September the box can also be shipped to Belgium. And I think they are also looking into the possibilities of shipping internationally. So it is a good idea to keep on eye on their site  (available in English). But unto the unboxing. The theme of August was The Power of Time. Since the box was delivered to me on Wednesday, and this box was only available in the Netherlands, I think it is okay to post an unboxing of this first box here on the blog as most will have gotten it. People can avoid it still here on the blog anyway. I’d hate to spoil anyone. I can’t quite remember in what order I pulled things from the box. Sorry, I was a bit too excited. Haha. 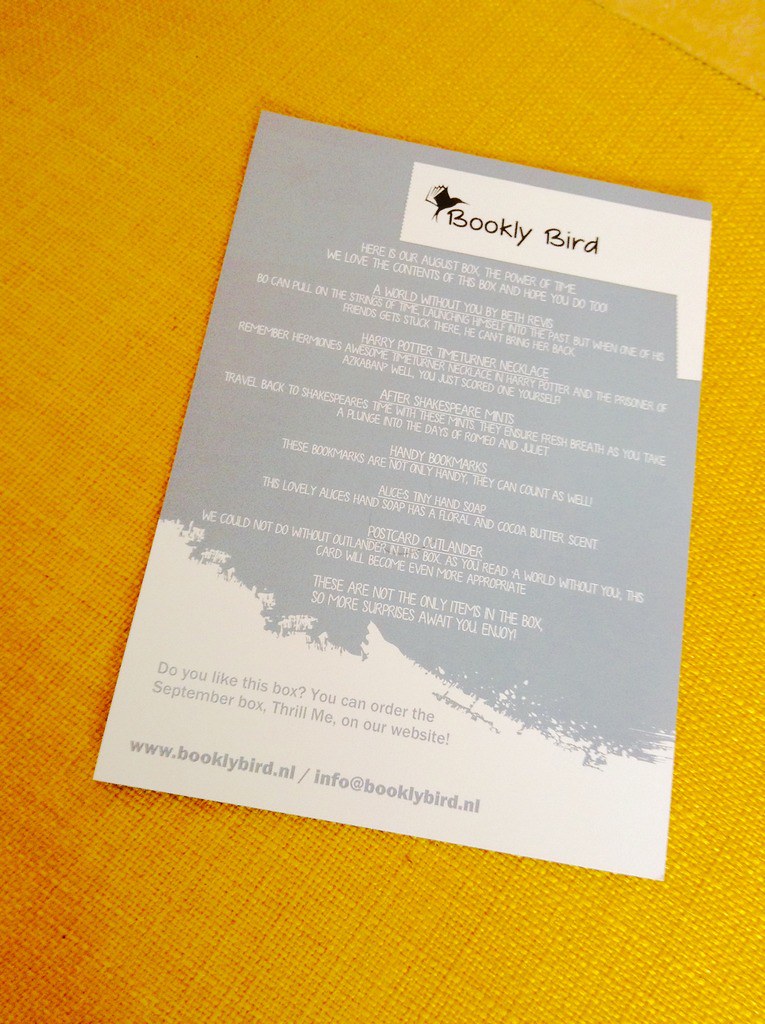 Of course the box starts with a card from The Bookly Bird girls. It has most of the items listed that are in the box so I didn’t look too closely at it. Best not to have the surprise spoiled.

Next we have some bookmarks that were in the box. The hand bookmarks are interesting and colorfull too. The blue one says booklover and is from The American Book Centre, a book store in the Netherlands that sells only English books (Amsterdam and The Hague). And lastly there is the bookmark of the bookbox. 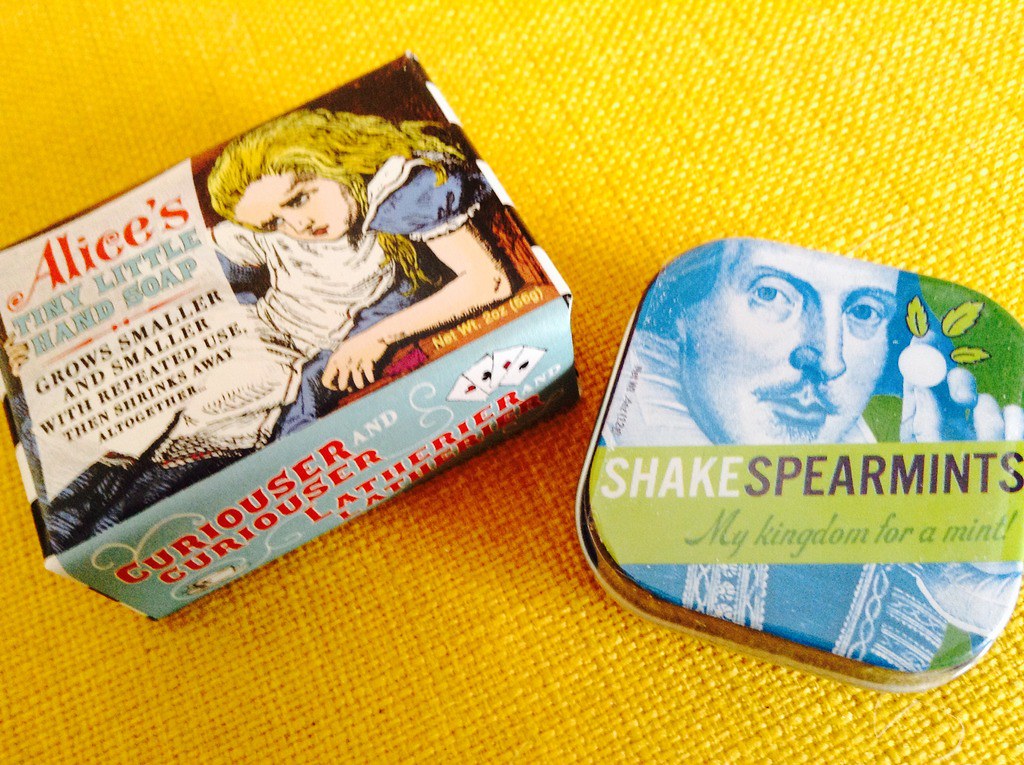 Then there was the Alice in Wonderland hand soap. It smells lovely and it was the first thing I noticed when I opened the box. The smell. And of course we can’t miss the after Shakespeare mints. 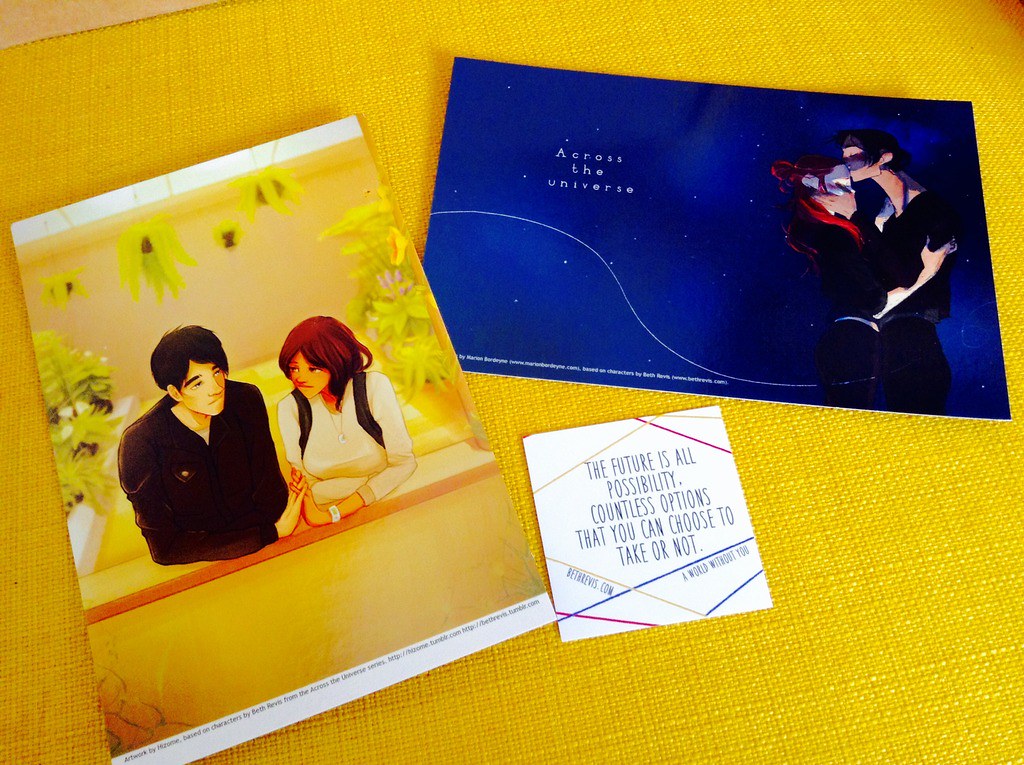 There were also these two lovely cards in the box with fanart of the authors (whose book is in this box) other books. And a lovely quote sticker. 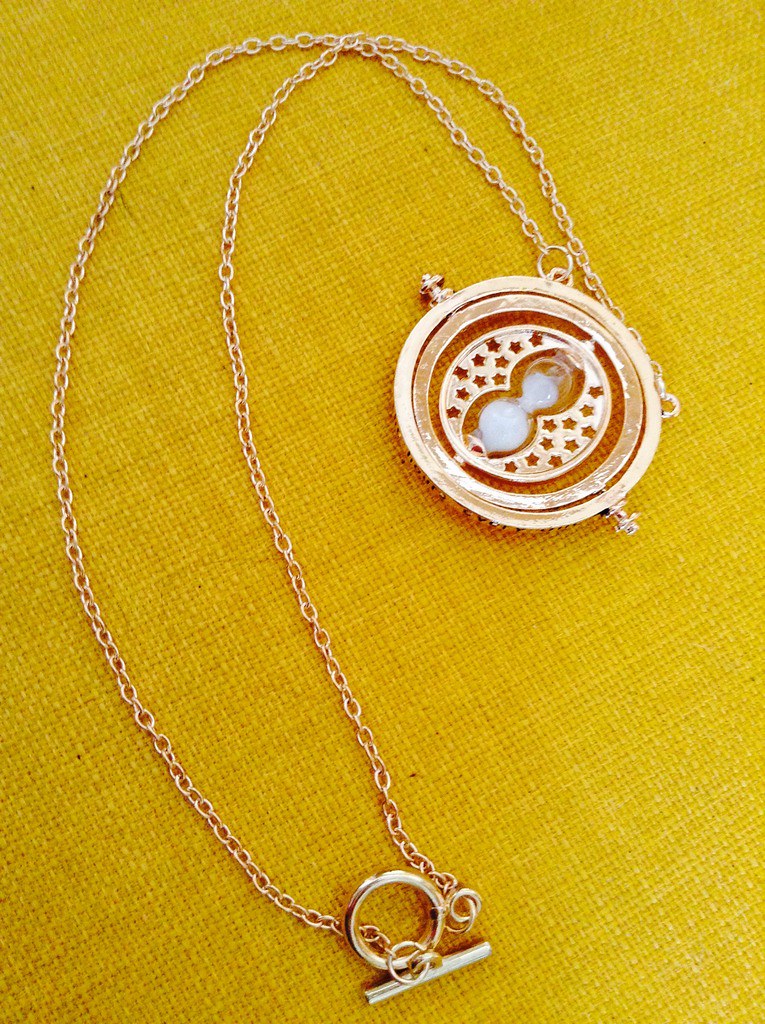 One thing I was super happy about with this box was this timeturner necklace from Harry Potter. I’ve always wanted one. So I am really happy about that. Totally haven’t been wearing it since the box arrived or anything. 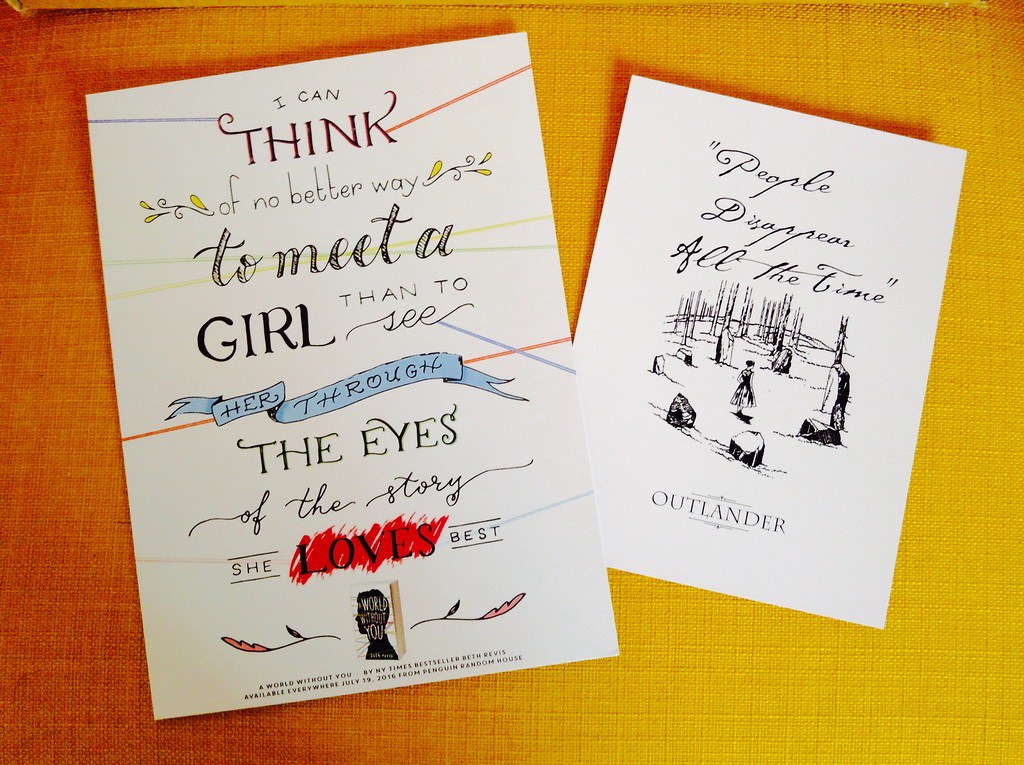 This print and postcard were also in the box. The print has a lovely handlettering with a quote from the book in this box. The postcard is from Outlander. And the card with the items says that this postcard will become more appropriate when you read the book. I’m curious about that.

But by now I think you will haven an inkling of what book is in this book box. 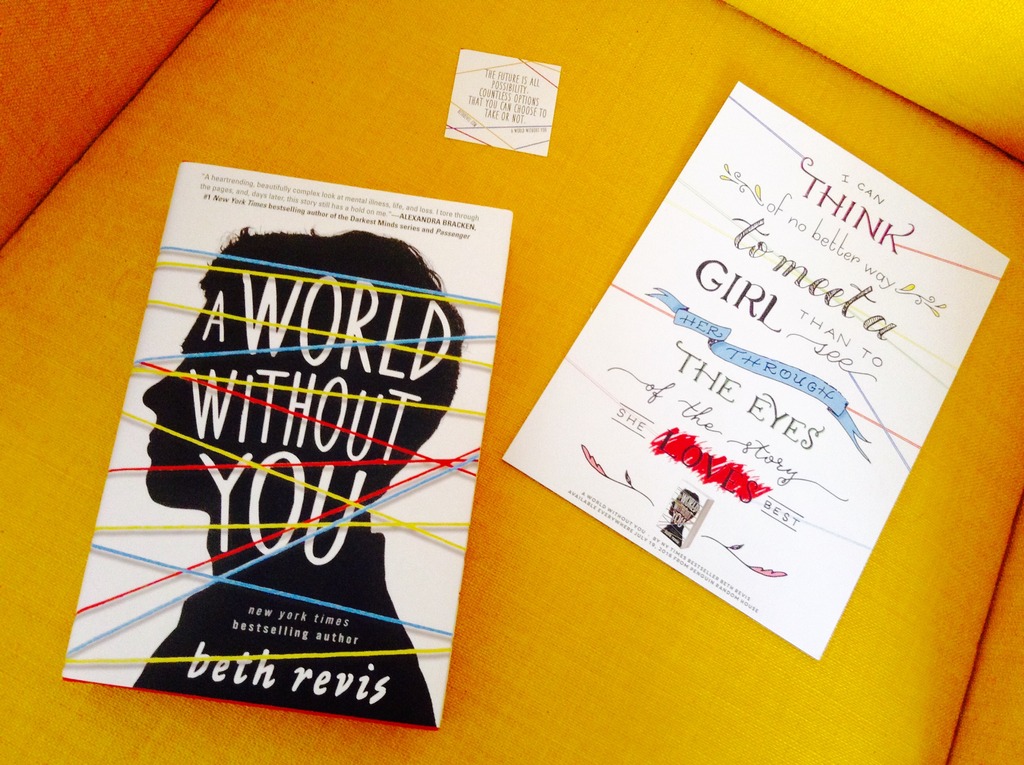 Of course it is A World Without You from Beth Revis. I’m not sure this is the type of book I was initially expecting when I ordered. But I think that is a good thing. This way I’ll actually get books that are somewhat out of my comfort zone. And I am curious. I have heard good things about Beth Revis’s other series. And considering my bachelor I do have some interest in menthal health. But I’m just super picky about which ones I read. 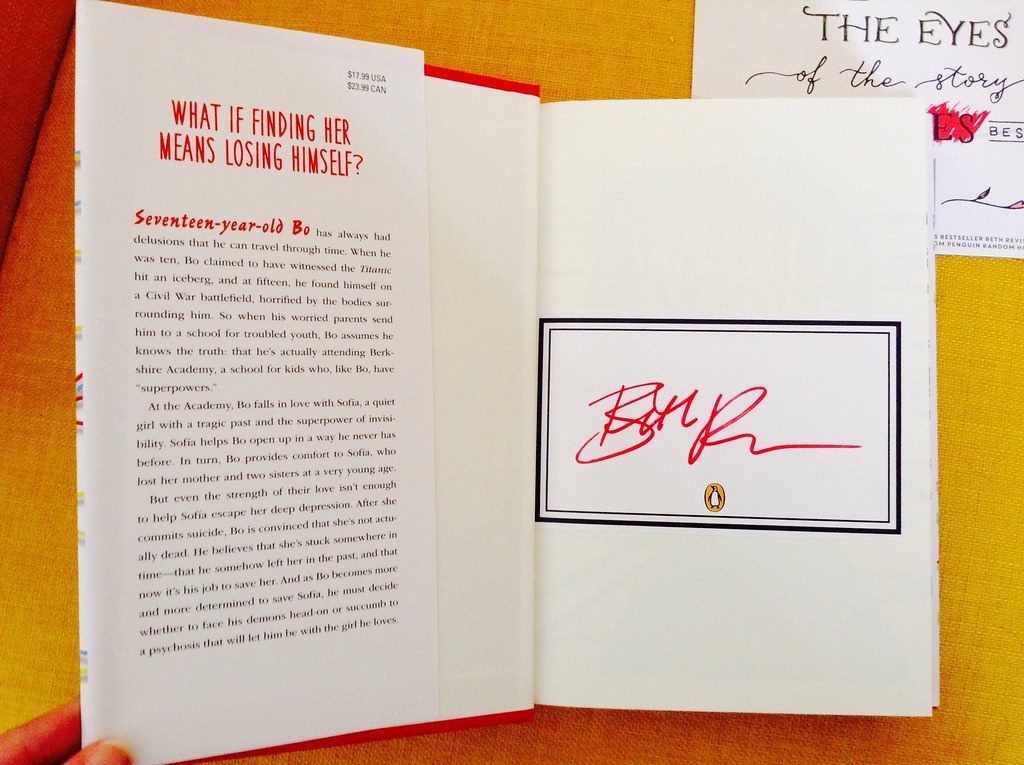 And the book has a signed bookplate! So that is really cool. 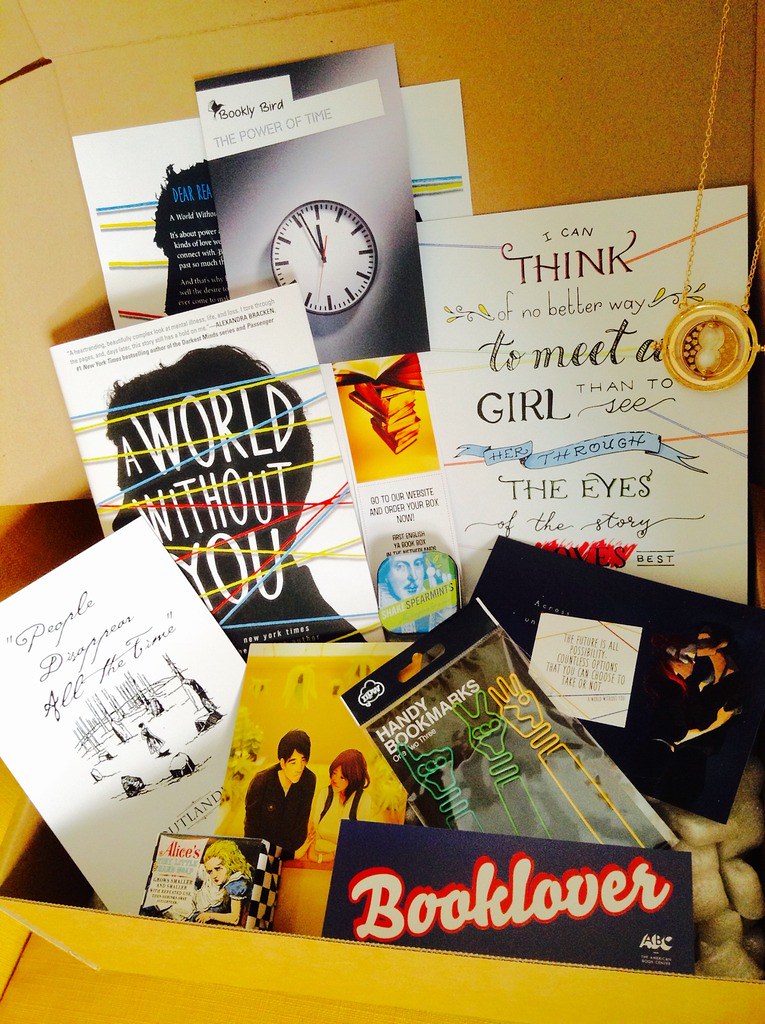 And everything together in the box.

I think overal it is a great box to start with. I won’t order the next one because the theme doesn’t appeal to me for September, and I’m not someone who will order a box every month I think. But I’ll keep an eye out for themes that sound really interesting.