You all know when those things happen. An unexpected sale or an unexpected book you come across. It’s the reason why I have decided to make another book haul post this month. Ideally I would like to have a book haul post every 2-3 months but I can’t quite seem to manage to limit my book buying at the moment. I suppose once the baby comes this will change.

A Dutch online site had 30% of certain young adult titles in English so I had a browse and found some interesting books. I also still had a gift card for 10 Euro because they couldn’t deliver my pre order of Flamecaster on the release date, so I paid 25 Euro for 4 books which isn’t too bad for here in the Netherlands. We don’t often have big sales on books.

Onwards to the books. 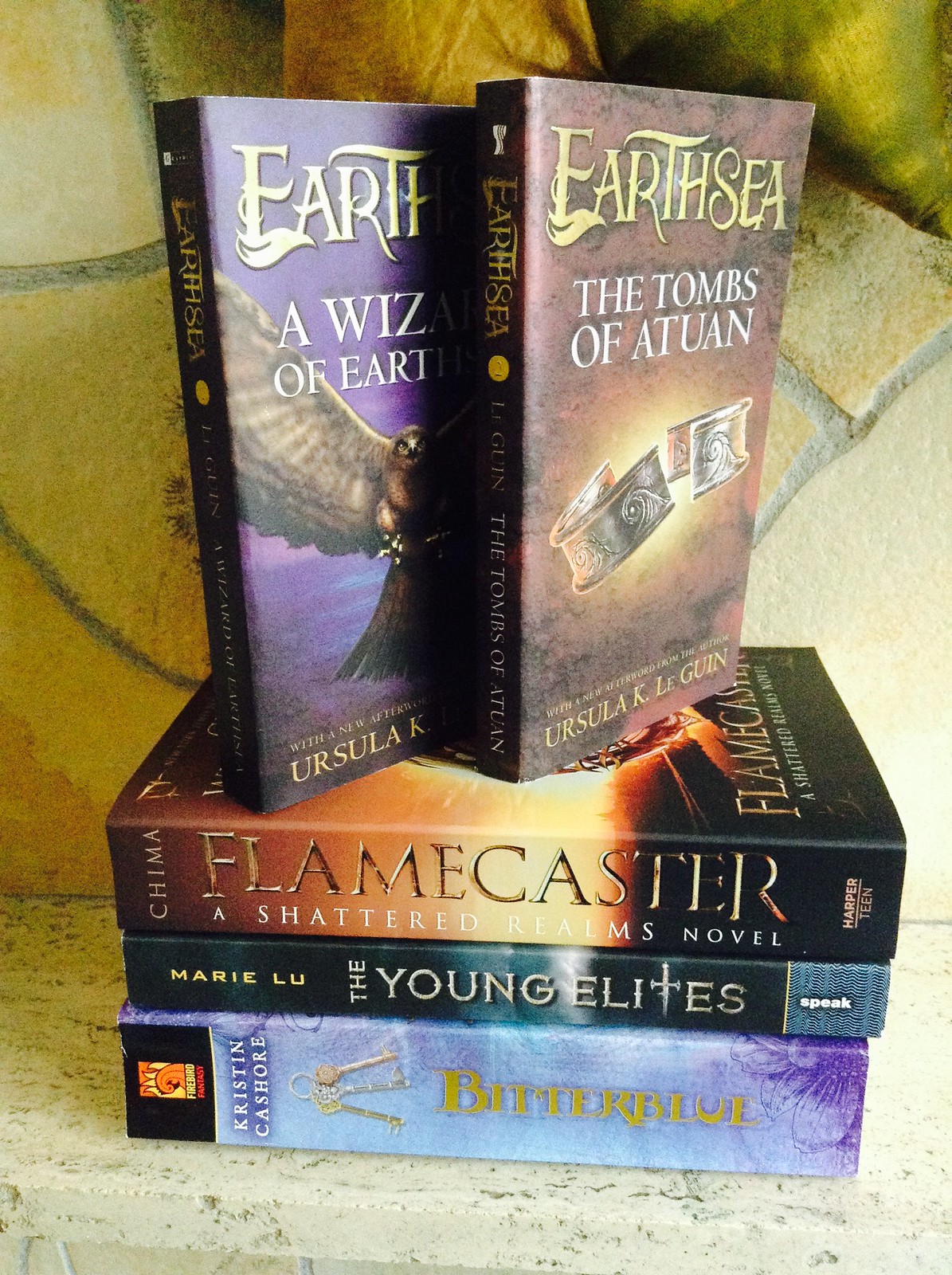 ★ A Wizard of Earthsea (Earthsea Cycle 1) by Ursula K. Le Guinn
★ The Tombs of Atuan (Earth Sea Cycle 2) by Ursula K. Le Guin
I had seen these small pockets at the start of the year for the entire series,  and I had regretted since then that I had not bought them. So when we were back to the same book store in Zwolle I had to have them. My husband was so sweet to buy them for me. ❤

★ Bitterblue (Graceling Realm 3) by Kristin Cashore
I have the other two books in this trilogy though I’ve only read Graceling so far. So when I saw it in the 30% of thing as mentioned above I figured it was good to be able to finish of this trilogy. I do have all different editions and languages in this trilogy, but ah well.
★ The Young Elites (The Young Elites 1) by Marie Lu
I enjoyed the Legend trilogy by Marie Lu so I have been curious about this new series by her. I have heard some mixed things about it so I had put off buying it for a while.

★ Flamecaster (Shattered Realms 1) by Cinda Williams Chima
Aaaaaaah. So as I have mentioned a few times I HAD pre ordered the hardcover for this book. But the online web store (coughstupidbolcough) didn’t deliver it to me at all. I heard nothing too, so after a few days we called, I got a gift card (the one I used on Steelheart) and I got an email later saying it would be here on the 22nd. Super late, but okay, I could live with that. However April 22nd went by and I heard nothing again. It upset me so that I impusively cancelled my order. I had a bad day, okay. I didn’t order the hardcover elsewhere because it is now 5 euro more expensive than when I pre ordered it. So I am a sad little bookworm. At least my local book store had the paperback.

★ Melodies of Blood: The Awakening by Maialen Alonso
The author contacted me to ask if I wanted to review her book. It’s an illustrated novel. And look at that cover. Obviously my black and white e reader and photo don’t do it justice. I can’t wait to get started in this one.