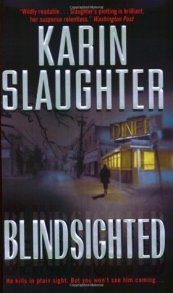 The sleepy town of Heartsdale, Georgia, is jolted into panic when Sara Linton, paediatrician and medical examiner, finds Sibyl Adams dead in the local diner. As well as being viciously raped, Sibyl has been cut: two deep knife wounds form a lethal cross over her stomach.

When a second victim is found, crucified, only a few days later, it becomes clear that Sibyl’s brutal murder wasn’t a one-off attack. What Sara and police chief Jeffrey Tolliver are dealing with is a seasonal sexual predator. A violent serial killer…

The detective type books seem to be the kind of books I am drawn to the most at the moment. While this book was off to a reasonable good start initially, it couldn’t quite sell me over. A nice detective book for a quick read.

The plot of this detective story was interesting. There are quite a bit of shock factors. However I was not surprised by the actual murderer. I suspected him very early on. Keeping the sister of the first victim somewhat involved in the case I didn’t get. That doesn’t happen in real life and they only relented because she had a big mouth. I guess it added some drama, but there was enough of that going around already.

Sarah was emotional as a coroner/medical examiner because she knew these people in this small town and that I liked compared to other books I’ve read with coroners as main character. However the first part of the book doesn’t hint at all towards the second part of the book where the reason for her more shaken emotional responses come forward. There is just no hint there was something in her background connected to the case and while I love surprises, it almost felt like it came out of nowhere.

Lena as a main character I did not like. I like strong females, but she was kicking against everyone as her default mode and I hate that in characters. I understand she just lost her sister, but from the other characters I gathered she was always that high strung. Also her opinions on lesbians and weak people /disabled people being the victims of rape did nothing to warm me up to her. Her being jealous of her sister’s partner was also icky. I just did not get her as a character.

There was some romance in this book between Sarah and her ex husband. There was a clear chemistry on the page, and it was a nice side story that didn’t distract too much from the main story line.