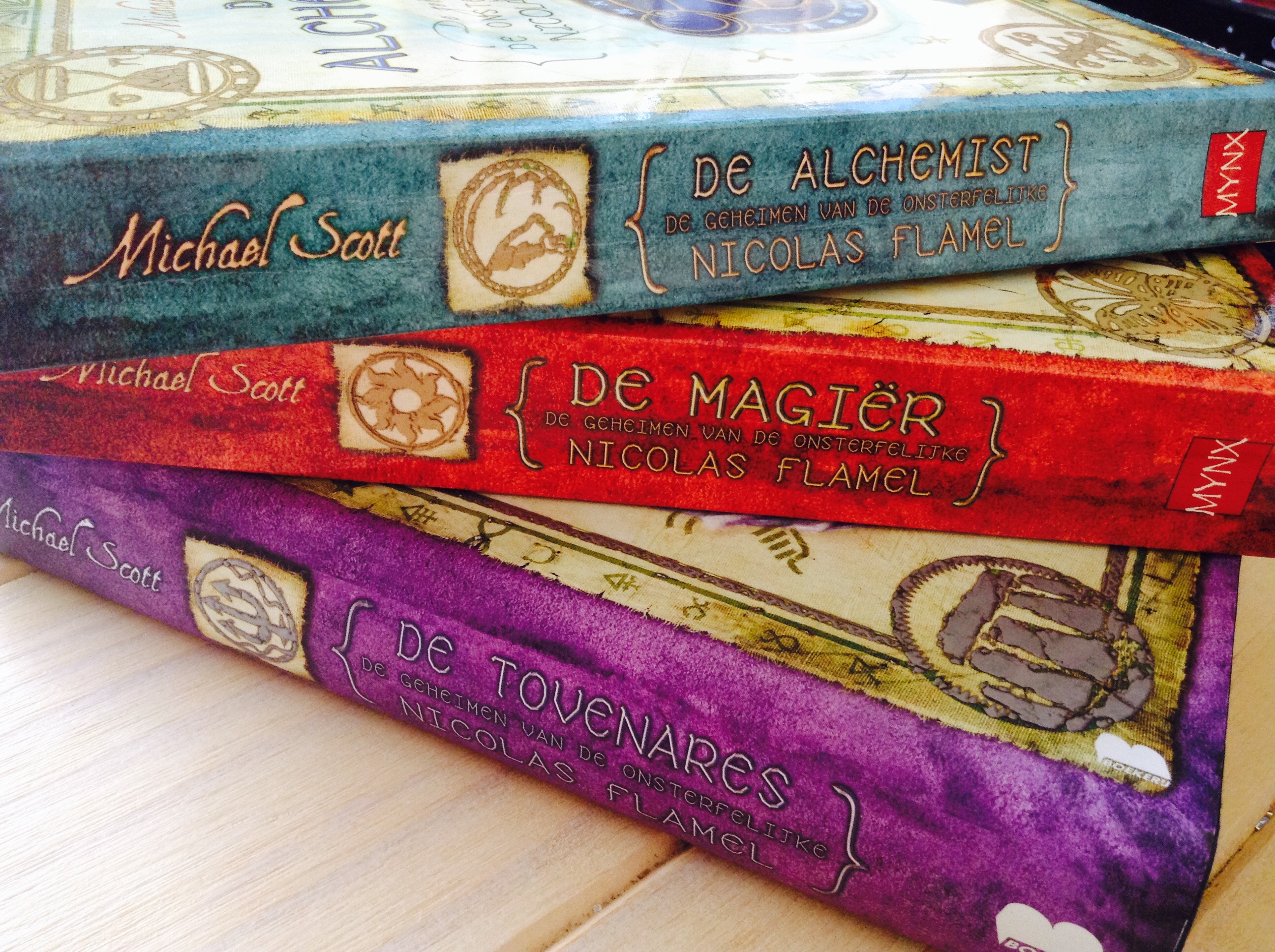 He holds the secret that can end the world. The truth: Nicholas Flamel was born in Paris on September 28, 1330. Nearly 700 years later, he is acknowledged as the greatest Alchemyst of his day. It is said that he discovered the secret of eternal life. The records show that he died in 1418. But his tomb is empty.

The legend: Nicholas Flamel lives. But only because he has been making the elixir of life for centuries. The secret of eternal life is hidden within the book he protects—the Book of Abraham the Mage. It’s the most powerful book that has ever existed. In the wrong hands, it will destroy the world.

That’s exactly what Dr. John Dee plans to do when he steals it. Humankind won’t know what’s happening until it’s too late. And if the prophecy is right, Sophie and Josh Newman are the only ones with the power to save the world as we know it. Sometimes legends are true. And Sophie and Josh Newman are about to find themselves in the middle of the greatest legend of all time.

This is a review for the first 3 books of this series. In total this series has 6 books and a few novella’s.

The idea of The Secrets of the Immortal Nicholas Flamel is interesting. Nicholas Flamel is someone who is mentioned in a lot of fantasy books in combination with immortality. I always found the idea of Nicholas Flamel interesting since I first heard of him. I find it interesting how little the gold is mentioned compared to the immortality as that was a later addition to his legend because of Count Saint-Germain. The series combines a lot of myths, legends and supernatural things together that do work. Every book gives us new creatures and monsters. There is also the use of other historical figures besides Nicholas and Perenelle Flamel. Jean of Arc, Count Saint-Germain and William Shakespeare are some that you meet in the first three books.

The plot surrounding the book of Abhram the Mage, the legendary twins and the destruction of the world as we know it is again interesting. However there is still a lot we don’t know about this book, about the twins or about those that want to destroy our world. There are little hints here and there. And when we do learn about something it isn’t deepened out, suggesting that we’ll learn more about it later on. But at this point in a series I would expect to have learned more about the enemies behind the two immortals that are chasing them.

The three books show similar set-ups where they are being chased, attacked, they escape, they meet new characters that save them and help them gain the twins powers, they are attacked again, one or both of the twins use their powers and they escape to a new city where it all starts over again. Despite this set-up and a certain amount of action, there are portions of the book that are boring. The book moves at a slow pace despite the action. This is because each book takes place over a small amount of time, three days maximum, and in the rest moments in the books we learn so little. It is a shame because the idea, the concept, could have created something epic.

There is also an annoying amount of telling and not showing. For instance we learn about a fear of a character in the second book. This is constantly told to us instead of showing us his reaction. Then there is the fact that a lot of these characters are meant to be old. However next to the Flamels, I hardly ever get this impression from the other characters. It is just constantly stated that they are old. There was one character that was awakened after 150-200 years of slumber, and she immediately started talking in modern speech. It did not sell me on her being an old creature.

As for the characters, Perenelle Flamel is the one that stands out the most to me. Her character is likeable, she is strong and she does not give up. Nicholas Flamel was interesting at first, but in the third book he didn’t stand out at all. Which is a shame as his name is in the title of this series.

The twins, Josh and Sophie, I have not been able to bond with. I don’t care about them. Their interactions feel forced. If it wasn’t mentioned so often that they were twins, I would not believe they are. Machiavelli, who we meet in the second book, and seems to be replacing the main antagonist from the first book, is interesting. Billy the Kid is as well. I hope he’ll be able to add some more humor dynamics to the next few books. Despite the other characters often being historical figures, they don’t stand out too much. In some cases I think they were meant to be comical, but it certainly did not have the desired effect.

If you want to read my seperate thoughts on each book you can find the links to those on Goodreads through the following links. I recommend doing this only if you have read the books though because of possible spoilers.
The Alchemyst // The Magician // The Sorceress