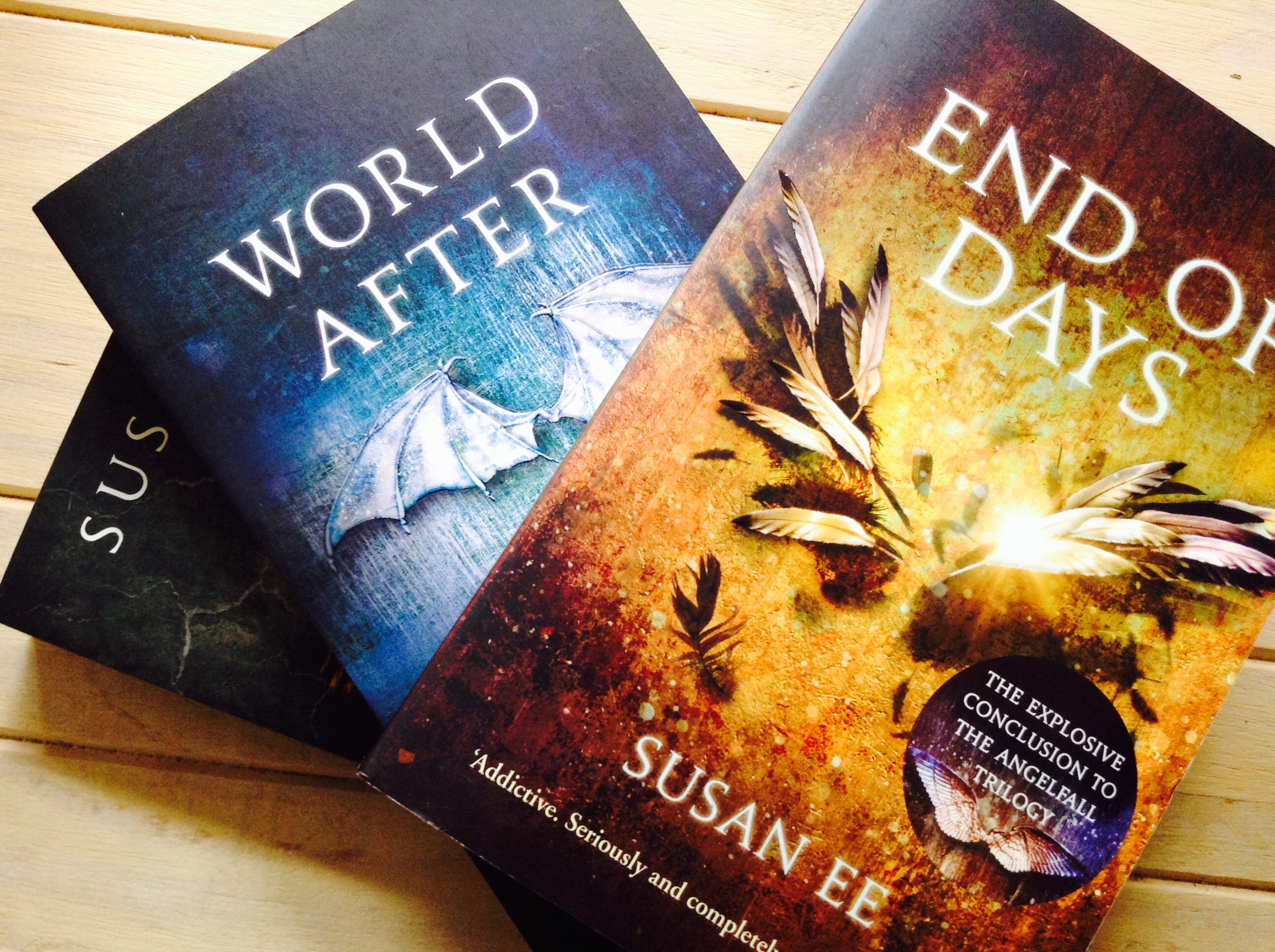 It’s been six weeks since the angels of the apocalypse destroyed the world as we know it. Only pockets of humanity remain. Savage street gangs rule the day while fear and superstition rule the night. When angels fly away with a helpless girl, her seventeen-year-old sister Penryn will do anything to get her back…

Initially when I heard about Angelfall, the first book, I thought, ‘Not another angel book’. There had been so many at the time. However as it has been getting positive reviews I decided to give it a try. I am so happy I did. Angelfall has become one of my favorite books.

Angelfall drew me in from the start with short, fast paced chapters. There are enough hints given throughout the book to keep us engaged and to figure out what has been going on with our world. Angels have descended upon us and left our world in chaos. Penryn’s sister gets kidnapped by angels and she has to work together with an apparently discredited angel to get her sister back. Susan Ee’s writing is to the point and strong. She sets a dark, captivating mood throughout Angelfall and continues this on into World After, that grab your heartstrings and won’t let you go. There is a certain rawness of emotions. This isn’t just a dystopia. It has horror elements. The violence and monsters are described well.

Unfortunately I felt that the third book didn’t carry on well with this. Penryn and the End of Days was originally planned out to be a 5 book series. However it was changed into a trilogy. And I think the last book does show this. This especially shows in the redeeming arc in this book that had very little set-up for it in the other two books. Though I can appreciate the author not wanting to draw things out, things were wrapped up too nicely in this last installment. Too happy. It felt like the author didn’t dare to make the hard decisions. And plot wise it also felt as if things were a bit too convenient. Romance took centre stage.. And that was a shame, because End of Days had all the ammunition to become a gut wrenching final installment.

Penryn, the main character, is one of my favorite female characters. She is sassy and headstrong. I am however not happy with how she became so focused on romance in the third book. She also would say one thing and do the complete opposite. I did not take so quickly to Raffe, and the third book has left me feeling mostly neutral towards him.

One of my favorite things in these books are the relationships with Penryn and her mom, and Penryn and her sister, Paige. There are many emotions and problems with this family, and it is real. Yet when it comes down to it they band together like a family. Other things I have enjoyed were Raffe’s sword (brilliantly named by Penryn) and the interactions Penryn and Raffe had with it and about it, and the twins of the resistance.
Though I am not happy with the ending, I would still happily recommend this series to everyone.

If you want to read my seperate thoughts on each book you can find the links to those on Goodreads through the following links. I recommend doing this only if you have read the books though because of possible spoilers.
Angelfall // World After // End of Days